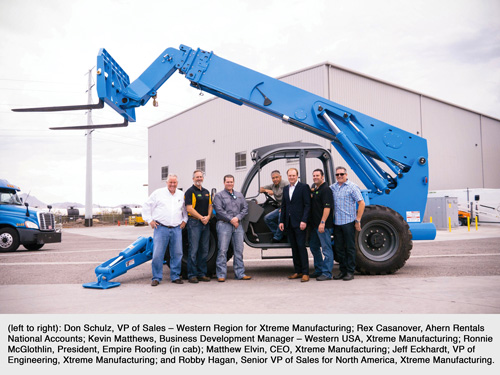 Launched at CONEXPO/CON-AGG™ 2017, the new Xtreme XR1055 is designed to lift capacities up to 10,000 lbs. (4,536kg), and can reach heights of up to 55 ft. (16.7m), and has a maximum forward reach of 40 ft. 7 in. (12.3m).  Engineered to withstand the toughest working conditions, this high-pivot telehandler is equipped with a heavy-duty steel frame, chassis and boom, as well as long-life boom, 360-degree visibility from cab, rollers that require minimal maintenance and deliver a smooth boom operation for precision handling of loads.  The Xtreme XR1055 is powered by a 74hp high torque 3.8litre Cummins engine that requires no DEF and no DPF, and the compact, four-section boom makes the lift easier to navigate around tight sites or transport between jobs, and is constructed using tall sections that deliver increased boom rigidity.

Empire Roofing specializes in commercial, industrial, and institutional roof replacement, repair and maintenance, and were listed in eighth position on the Top 100 Roofing Contractor List 2017, published by Roofing Contractor magazine. Headquartered in Fort Worth, Texas, Empire Roofing operates from 11 locations in the U.S. and 2 locations in Mexico, with more than 700 full-time employees.

Since founding the business in 1982, President, Ronnie McGlothlin and his team of professionals have built a reputation for delivering the highest levels of customer service.  The business invests more than 10,000 hours per year in safety training for employees, and Empire Roofing operate their own equipment fleet, including cranes, telehandlers, tankers and trucks, purchasing the best equipment available for their employees in the field and to ensure they meet their high-quality standards.

The six Xtreme XR1055 telehandlers will be deployed immediately into the Empire Roofing equipment fleet in Texas, assisting with roof replacement projects on multiple sites. The lifts were handed over by Xtreme Manufacturing business development manager for Western USA, Kevin Matthews, and Rex Casanover from Ahern Rentals National Accounts, who made the initial introduction to Xtreme telehandlers.

Ronnie McGlothlin, Founder and President of Empire Roofing, said, “We discussed our material handling needs in detail with Kevin and Rex, and we found that the new Xtreme XR1055 hit our sweet spot for lift capacity and lift height. The build quality of the Xtreme telehandlers was also a big draw for us, as we manage our own fleet and need equipment that is built to last and will handle the tough demands of our jobsites. I believe in purchasing the best equipment available, which ultimately benefits my employees and customers.”

“These six units will be deployed for many jobs, including delivery of roof top equipment, safety equipment and materials. We take jobsite safety seriously, and features like the 360-degree operator visibility from the cab will make a big difference to our operators. We also have multiple tasks where we can utilize the built-in machine-rated boom lift point to improve productivity. We are excited to be the first customer for this new model and look forward to getting them onto our current projects.”

Robby Hagan, Senior VP of Sales for Xtreme Manufacturing, said, “We sincerely appreciate this opportunity to deliver Xtreme telehandlers to Empire Roofing. We are grateful to Ronnie and his team for putting their trust in Xtreme and for being the first customer for our latest model. We are confident that the Xtreme XR1055’s will be a great addition to their fleet and look forward to developing this relationship in future.”